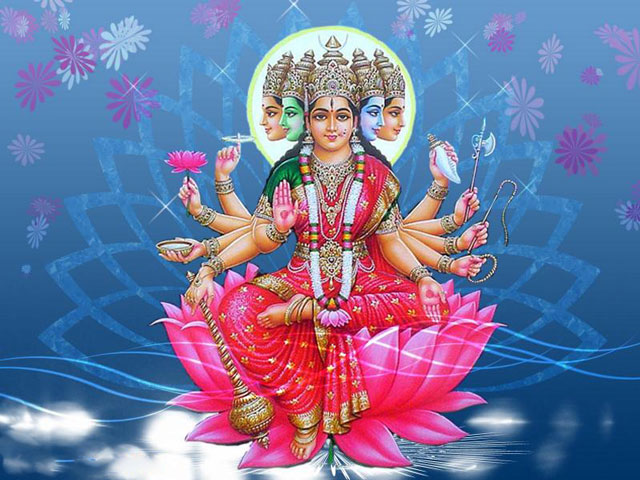 ​Vishvamitra Maharshi, I hope everyone knows his story? He’s all the time angry person, he’s a maharshi, Vishvamitra. He founded the Gayatri mantra. That Gayatri mantra is equal to the four Vedas. He broke certain part of his disksha. He’s suppose to be celibate for certain period of time and unfortunately, he broke his diksha and the divine circles, divine soul’s community, didn’t allow his soul to come in the Devata’s place. He’s so angry and he created himself a heaven and he found new mantra, Gayatri, that is equal to the four Vedas.

He’s a very highest meditator in the universe, than the Shiva. Then, there is a big story... story, the Vedas says, one time the infant of the Kailasha, you know Kailasham who lives the Shiva, which place the lives Shiva. The body guards of the Shiva is not give the permission to go in front of Shiva. At that time, Vishvamitra Maharshi came, “I want to talk with Shiva, give the permission.” Then the body guards, “No, he is in meditation, not possible now.” “Shiva is off from nothing in front of me, I have little doubt, that’s why I came here to clarify that. Call Shiva immediately,” and the body Guards not give the permission. “No.” Then, he’s very angry on Shiva.

Then again, he went to the Vishnu, you know Vishnu? Same thing happen. Vishnu is very busy with Lakshmi with the dancing, “No way, I’m sorry to, right now to ...” it is in the story, “He’s very busy, we can’t give the permission to contact with Vishnu.” Same thing happen. Then again he go to the Brahma. Brahma is sleeping and Saraswatti doing massage to his feet. And Vishvamitra Maharshi came, the body guards give the permission and Saraswatti said, “Silent, you sit, when the Brahma wake up, you talk.” Brahma is observing and sleeping and she is doing massage. And he waited, waited, waited... long time. Brahma is not wake up. Then he became very angry on the three persons. Oh, the three persons is very power in the nature, that’s why the three peoples is making troubles in nature. That’s why I will find the new mantra for them, more than powerful than them.

So that Gayatri form, the Mother Divine form, he argued with Her, “Ok the diksha I really respected, the principles I really respected the energy way but what can I do? You are the illusion, you are the maya, you hitted me - then I broke my diksha. If you’re really protecting me, if you’re not taking care of me, who will take care? You are the problem and also you’re the solution. You made me to break my diksha so you need to fix it. All the divine soul’s community are not allowing me into their group. I’m completely out of their group, so I have to create my own heaven!” Then he manifested Gayatri mantra and he manifested Her form completely forgiving him, “Ok I’m blessing you.”

​Then he entered in the forest, then he done the meditation. Then he takes some words, letters from the four Vedas and he assembled and he assembled and he going on down that mantra, again – himself. Then he found the new energy – one angel - Gayatri Devi. Then he issued, he issued in the nature, Gayatri is more powerful than Brahma, Vishnu, Maheshvara, than four Vedas – done it..