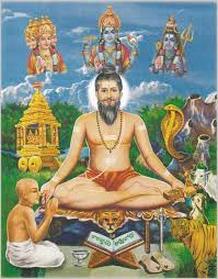 ​Veera Brahmendra, he got married, six kids. He wrote unbelievable astrology, but all his sons are idiots, completely dumb. But only one student, Siddhaya, his name is Siddhaya - Muslim. He’s almost ready to get married. Veera Brahmendra is sitting under the tree meditating, “At least one student I need on this Earth. Who is that, my student?” He’s sleeping, he sucked him, he made him to come. At the time, Siddhaya was suppose to do the marriage, everything they’re preparing it. Then he went to Veera Brahmendra’s, the sadhu. Then he caught his feet, “I want to know the truth. Please explain my dear master.” Then all the Siddhaya’s parents, the neighbors, all their family members came with the knives to Veera Brahmendra, “Who are you, the saint to grabbing my son to making him as a sannyasin? We want to kill you!” “If he comes please take it.” Siddhaya said, “I don’t want to come. If you really want me to go away, I want to die here. I want to stay with this, my master, no matter what!” Ok, he stayed it.

Then Veera Brahmendra’s sons, his student and some more students, they’re walking. It’s a true story you can read in the book. There’s a dead animal, terrible smell! Simply he said, “Go take that meat and eat it everybody.” Everybody rejected, “We’re strict, no way, we can’t go that terrible smell!” Siddhaya, simply he went to the master, he ate it. Then Veera Brahmendra turned all the fruits and flowers all the dead body. Then he did like almost like thirteen, fourteen years service.​

Then Veera Brahmendra, the saint, is going to take Jiva Samadhi. It didn’t tell to his student, he kept lying, “I’m taking samadhi next year,” just keeping on putting illusions to the people. Then, all of sudden he declared one nice morning, on the morning just he said to Siddhaya, “Go and get specific flowers.” He has to go one hundred kilometers walk and come back one hundred kilometers. It takes to him almost three, four days. He says, “Ok, master said it.” Then he started to walking. Then Veera Brahmendra, he sat in the samadhi. They started to making the samadhi around him, then they closed it.

When Siddhaya’s going in the middle, to the forest to different village to get the flowers, his master came as a saint, as an old man, “Oh, you’re a student of so and so, why are you going? You’re master already got samadhi there.” Siddhaya said, “What, what are you talking about?” “It’s true. Just grab this leaf and that leaf and this leaf, go to the well and spray the water, it becomes like those flowers. Then go and give it to your master.” First he made him shock, “Your master got samadhi.” He’s under kind... he lost fifty percent his consciousness. Then he grabbed all the leaves in one cloth, then he went at the well and sprayed the water and turned all to flowers. Then he wrapped it and started running back. Already his master is in samadhi. Then he’s terribly upset, then he’s beating, beating, beating his head to the samadhi. Then he (Veera Brahmendra) walked about from his samadhi as a soul. Then he asked, “I’m not eligible to see your samadhi? I worshiped you like slave, more than the slave, why can’t you give at least final darshan. Now you’re giving a darshan as soul.” Veera Brahmendra told him, “Don’t worry. Just take these power objects, sandal and stick, and he taught the formula how to get Jiva Samadhi. And his samadhi is also very close to here, six hours drive. And Veera Brahmendra is samadhi is almost seven hours drive. He wrote many palm leaf books, we can see but government is protecting it.

It means the student never knows what the master’s inner mechanism to testing it. You know what I’m saying? The Guru Parampara lineage and I brought it, group of people to the caves where he really got enlightened – Yaganti. Terrible depth caves where he meditated. So master and student relationship, if you got confused, then the number starting counting down. Ok, he is, he is, no matter what, keep going and keep counting. Since one and a half months, you have no idea how much... I can’t blame on Baba... the Guru Parampara is playing the tricks on me - I have to catch my head, I can’t think. It’s very super strange. He’s the person to giving the problem, he’s the person to solving the problem, why I need to worry. You know what I’m saying?
Back to Swami's Stories