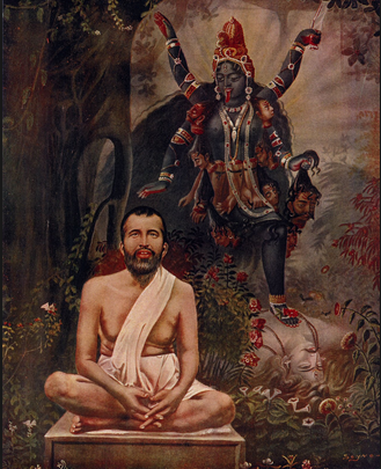 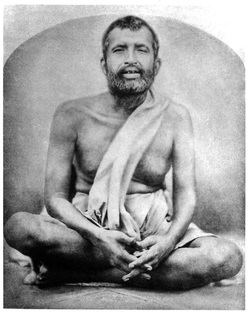 ​
​Ramakrishna Parmahamsa is a supernatural spiritual person. He done practicing and meditation twelve years, just about his life experience I tell you. He done twelve years meditation day and night in old temple in front of Durga statue. You know Durga statue? That statue is very terrible. You know terrible Durga picture, holding head, taking knife, sticking tongue and it’s bones like Kali. What’s the Kali?

Making that and he used that statue, he done always meditation non-break, day and night, eating and sleeping in front of the statue. He’s sense is to see the Mother God. After twelve years, he disappointed very lot, day and night he’s doing, going to river, taking bath and coming and sleeping. When he’s angry, going in the sleep, getting some food, eating and again sleeping. After twelve years he’s disappointed then he decided there’s no God in the world, the man created just like statue, Maha Kali, Durga - it’s useless, the man is a mad fellow - the man is believing God is there.

Then he decided that he take in the mother’s hands knife, he want to hurt himself, to kill himself. When he’s in the terrible depression, automatically one good master came, one lady. That lady name is Bairavi Mata, that one lady master came in the temple. Ramakrishna Paramahamsa, “What are you doing? You’re taking food, why don’t you try...” Finally , when he’s cutting himself, a few minutes he’s trying, at the moment it’s pain. She came to see the Kali Maha temple, unfortunately something happening, he’s going to suicide!

Then she found, “Oh, you want to see the God, come, come with me, I’ll show you.” Then he say, “Lot of people telling God is there, but what is the proof? What is the... of Durga?” Then she said, “Come with me.” Then she teach the Siddhis, “First of all, you can’t go directly to the God, first of all you go from.... Whatever she have the power, you win one by one. You win one by one, then you enter to her heart. The powers cannot enter to you at a time. That is the nature. First of all you go by the siddhis, asta-siddhis, first winning Mother’s power, one by one. Then, finally, you take...” sangha means bringing him to burial ground. You know what means by burial ground?

Ramakrishna Paramahamsa is having a huge wound in his backside.  Everyday the maggots is coming from his back.  He’s suffering every night shouting, shouting “Hey Ma, hey Ma, hey Ma.”  Morning they have to clean his wound to the take the maggots out.  Vivekananda is watching, “Hey man, Master, you’re so powerful.  We know everybody you’re really connecting everybody Mother Divine.  You have lot of abilities,  but there’s a lot of doubt in me.  Please, how can I wash out this negativity, doubt in my mind?  I can’t decide are you really my Master or not?  Sometimes, “Maybe I catch the wrong master.”  Is really I can go to reach my destiny or not with you?  Master means you have to be so example, like a guide having so healthy, charming, so dazzling, so radiant, so brilliant, so…all abilities.  But you are with lot of suffering always sitting on the cot and suffering and suffering and suffering and suffering.  I can’t understand you.  Are you really my Master?  Please don’t ruin my life.  Can you clarify my doubt?  Please Ramakrishna Paramahamsa, oh my dear Master.”  He asked but Ramakrishna Paramahamsa, he never gave answer to him only, “Follow your heart.  Get out.”

No, he showed him some angels.  It is not in the histories.  He showed some beautiful examples, some experiences, but his soul not that much ready yet.  And Ramakrishna Paramahamsa he saw the life span of Vivekananda is not that much long.  Then he gave moksha, that’s a different story. Then he prepared Vivekananda, you know Vivekananda? He’s a good teacher. Then he said, “Go worldwide to give the program.” Vivekananda came to America, then he became known worldwide giving the spiritual path about the siddhis, about the power, what you mean by God, how you can win the God. He took the path of, he entered in the powers, there’s a lot of ways to reach the God - this is one of way. The way of his love is extraordinary and his grandfather is highest Jaipur, but there is also highest Jaipur, less than the Laupaut, means be good, do good, see good - be good, do good, see good. That takes some lifetimes, lifetimes, but part of doing meditation is finding the different power in the shortest way in the Kali Yuga.

​Ramakrishna Paramahamsa born in the Kali Yuga just one hundred fifty years back, a hundred fifty years back, a lot of saints born like Shirdi Baba, Ramakrishna Paramahamsa, they’re showing lot of miracles, proving a lot of things of the God powers, so we must surrender... These siddhis powers give the moksha. The siddhi powers give the moksha and the self-confidence. We can improve the willpower in others. We can make the universe with love, we can make the universe with love - we can fill the universe with love. These mantras, when we use it how to do. Mostly these powers, these things, these mantras we will do, these slokas we must do at early morning hours or Brahmamurta. What does it mean by Brahmamurta? Brahmamurta means there is no time at midnight, no time at daytime, early morning, it is two to five am, morning. This is the right time to do that, all of them - one by one, one by one.