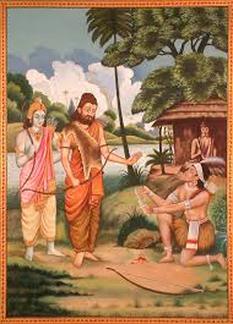 ​I will tell one small story in Mahabharata. The Pandavas guru master taught many, many, many techniques how to kill the enemies, to the Pandavas. Then the master finally gave the promise to Arjuna, “Arjuna you are the biggest person in the world. Nobody can beat you with his energy. I gave all my energy to you. You experienced with my soul incredibly. In the fighting, you are like a big master - you can kill anybody easily. Nobody can stand in front of you. That’s the boon I gave to you. Entire on this planet, you’re the number one. I taught you that technique.” Then Arjuna is really, really thankful to his master. “Oh master, I’m so happy and proud.”

​When the master is teaching the Pandavas everyday, a small forest tribal boy, he watched that. He took the master’s face in his visions and he made a statue. Everyday he meditated heartfully on that master and he trained, he practiced. Heartfully he did it putting the master’s statue. He became very, very powerful - more than Arjuna, but they don’t know each other. Even the master didn’t know that boy sucked the huge energy.

Unfortunately the Pandavas came to the forest to hunt. The tribal boy watched the Pandavas killing the beautiful animals in the forest. The animals were close friends of the tribal boy. Arjuna killed one deer. That deer came bleeding to the Eckalavya, the tribal boy, crying. Then the boy got really mad, “Who killed you in this forest? I’m the big person. I have incredible energy. I did big practices.” Then he climbed a big tree and he saw who was there. Then he started to attack on Arjuna, to kill him and the five Pandavas. He’s throwing the arrows incredibly. Nobody can stand in front of him. Then he made with his arrows like a prison around the five people.

Then the master recognized from the ashram that something was happening to the Pandavas, “Why they didn’t come back?” Then he came to search them. Then he saw the Pandavas in the arrow’s prison. “Who wants to come out? I’ll kill you, I’ll kill you!” They don’t know that the master is his, Eckalavya’s, master. Then the master came, then Arjuna is crying, “Master you cheated me. You told me I’m the number one in the universe, with the powers, the arrows, whatever it is. After all, a tribal boy made me like this in this arrow’s prison!”

Then the master opened his channels and he saw who the boy was.  That boy, in a fraction of minutes, he watched that master when he was teaching somebody else.  He took that energy, he kept it and he built it up - he never let it fall down.  Then he built it up, built it up, built it up.  He learned from the nature through the small part of the energy he brought, from watching the master - the seed.  Like, if it’s a mango seed, just he took the fruit juice from that seed.

One other point here, in the previous days in the tradition, the masters must only teach to the king’s children, not to tribal people.  It was a big law they can’t teach the secret information, the secret theories.  Then the boy is saying, “Oh you’re talking from your mouth to me, I’m so happy.  Please ask whatever you want.”  The master asked, “Give me your thumb (on your right hand).  Cut it off and give it to me.”  All the tribal people are crying, “Oh you’re not a genuine master, why are you asking for his thumb?” The thumb is the main character in your life.  If he has no thumb, he can’t use the arrows.  Even if you want to eat something, to do some work, it’s the main energy - earth energy in the thumb.

Then Eckalavya, the tribal boy, just he took one arrow and cut his thumb off,  “Ok take it.”  Then the master at that time, he really, really apologized to that boy, “But entire in the universe, I’m giving one boon to you, “Who is really doing Atma Sam Yoga process like you, they don’t need to do hard work.  If they have at least a small piece of the energy from the master, if they’re able to keep that energy like you, I’m giving the blessing to the entire student’s kingdom - they will get success!”  From then onwards, according to that time onwards, according to the Indian saint’s tradition, Atma Sam Yoga Process came.

The Eckalavya never learned any prayers from the master.  He never trained from the master directly, “You do this, making this angle.”  He never did like that, just he saw a few minutes when the master was teaching secretly some students, then he saw that and he took that energy and he kept it in his heart.  He came out and he made the master’s statue, then he practiced in the nature himself - then he grew incredibly.  In Mahabharata this is one small chapter.

​
Back to Swami's Stories