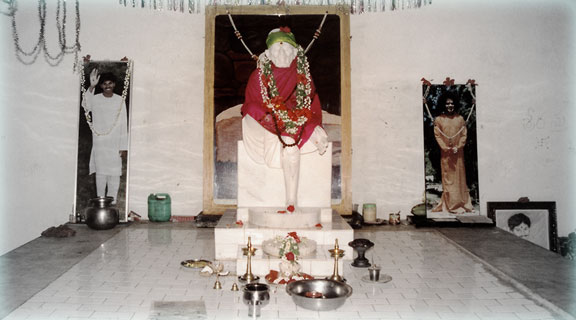 One time you see the India and visit Shirdi. Telling is common thing, by getting own experiences - wonderful thing. He seems to old man - he’s not old man - powerful man.

When I made the temple, putting in my ashram his statue, when you pick-upping the statue, the people starts, “Swami don’t worry, we can put that, with man handling the statue, to the stage.” That stage is four feet height, near, near, four and a half feet high. The crane came, all the hall is marbles - you know marbles stones? It’s like glass mirrorism, I make like that. If you walk that, we can see our picture on the floor with the dazzling, powerful flooring.

The crane came very smoothly and it dropped the statue under the stage - it only came near the stage. First of all they wants to put the statue on the stage then, “No problem Swami, we can put by man handling,” the people advices says... After a few days, one good day, we want to put on that, on May 22nd in this year. All people, some thousands, thousands of people came the function to putting on the stage - being with prayers and yagyam, fire puja and everything. Minimum fifteen, twenty people, strong persons came to lift that. They cannot move it one inch, “What we do?” They’re making like... the, this practically happened, “Then something is wrong in our prayers, something is testing...” Then everybody’s just peacefully. I sended to almost all fifteen, twenty peoples - sending all the people out and doing prayers.

You know balls, iron balls? Make-upping with Baba’s namaskarama, “Om Sai, Shri Sai, Jai Jai Sai” He said, “Who does my name, I will go in the trance,” he said. When he’s alive, he told the devotees, “Who does on my name, namasamkirtanna, will be very happy - whatever they like, I will give that,” he promised that, devotees. The fifteen, seventeen people, they started the “namasamkirtanna” and three people just bend that - only three and one man is put the balls and made the turning in front of stage and with the sand bags we made the balls with rope.

So, everything is willpower and making anything, we can melt anything with our prayers - we can lift anything. I am living in Penukonda, there is a big fort, you know fort? In that fort we can identify twenty tons of rocks, one by one, no elephant cannot lift it, no peoples cannot lift it, but it is in one by one. That is emperor’s time, they built it. I’m living in that place and throughout my temple, there is a big fort with the highest rocks one by one. In throw of the mountain, there is a fort wall, you know fort wall? Lot of peoples coming to observing for the rocks, how they made the fort? Makes confusion, ok, anyhow they made that and they are deciding on going. On that time, the peoples going on talking... the tradition is by, with the help of prayers they may lift - by God prayers they made, but nobody don’t know how they put it.

Somebody’s saying some yogi man came by his powers just he made one by one like a bricks throwing, like different gossips running. But finally, we can decide one thing, by the God prayers, by healing, we can heal anything, we can do that. On that thousands years back, there is no cranes, no electricity, you know? No electricity, even big elephant cannot lift, cannot turn that rocks. There is no scope to put that. They made that like that, Indian Vedic knowledge.

Now all the scientific reasons came, starting the helicopter going flying. If you say for to that period before, generally we discussion like that, they won’t believe—a helicopter, putting the pedals, starting and going - unbelievable thing. This time, there is a little... if you are imagining like these are all things like that, like that - these are unbelievable things. Maybe how it possible, not impossible, impossible. All our mind says, “Impossible, impossible,” but at that time, maybe it’s possible by the powers.