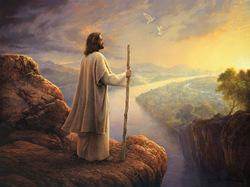 Betala, the Betala means, he’s the master on the souls. He’s a master on the souls, it means he belongs to...he’s the son of the Shakti. The Shakti, just she take out from her soul and she throwed on the Earth and automatically it growed – he’s called Betala. He’s the protector of the Shiva in the burial ground.

When the Shiva is meditating the evil spirits cannot touch to the Shiva. Even though he’s a powerful master, Shiva also meditating in the burial ground, some crazy spirits, powerful saint’s souls – there’s a big chance to attack even to the Shiva also that moments, the Shakti, Mrs. Shiva, made one beautiful soul, created to protect the Shiva energy – that’s called the Betala. It’s the secret information.

Betala means, he called the king of the Bhuta, it’s called in Sanskrit. Bhuta means whole souls - negative souls, positive souls – he’s the boss. Shiva, Shakti next, there is one layer – Betala. In his life, (Jesus) first he meditated on the Betala. In the universe we can call any, any soul, even we can talk direct to Shiva, direct Shakti - except Betala - he’s very, very hard to make him to appear in front of us. He has a special priority in the Vedic tradition. Betala means he’s like a equal brother of like Hanuman – he don’t know how he’s energy... if he started to grow up, he grows up to the, up to the stars, planet to planet to planet – he growing up like that. You understood? Even the Shakti, also cannot control him sometimes, that energy automatically it grows.

He does really great things to the good, but his duty is to protect from the negative souls’ kingdom. Negative Kingdom – not to go anywhere – to make them to controlling in his hands. One is Betala, second one is Ractavala, third one is Bildavala, fourth one is Kalavala, fifth one is Prapuntidala - punti is very important Prapunti, sixth one is Valadala. The Betala, he again, he manifested this five souls to do his works... like assistants – the Betala.

Just the Betala... I’m going to talk about why he (Jesus) sucked, why he invited Betala. Just I’m giving the little one page introduction. Totally with the Betala it’s six, in the universe only these six... So, this Betala his totally works... there is a many big chances we can’t invited to get the Shiva energy, the Shakti energy to who was really suffering with the devils, negative spirits. Such type of persons in the Indian tradition, they prays first to Betala. They avoid all the Gods and Goddesses – they kicked out and they meditates on the Betala to suck his energy, to make him to control. If any souls hear the Betala’ name in the universe, immediately it goes very, very suffering – the spirits... You understood?

In the universe as a, who came as a human body, the first person who brought the Betala to make appear to talk, the first person is the Jesus. That is, there is a cosmic law in the Himalayas in the Bhimashankarani Temple. There is a one well. You know well? With the firing, firing... Who sacrificed their body in the well with themselves, then there is a law from the cosmic – unbelievable Shakti they can receive from that. Unbelievable Shakti it comes to make him to happy. That voice, the Jesus when he meditated, that voice he heard in front of that fire well. You understood what I’m saying? There is well with firing, even until now, Manasarovar we can see the water, it’s very hot – you understood?

Just here... one this... this lake, small pond, this well - terrible hard. This side totally cool water, then we went little far away, then there is a one lake, it’s like sindu, Sindu Lake. Sindu, it’s like a bubbling – like a burning like you know - like a melting – high boiling. In the Himalayas there is the highest – many things is there with the energy – a natural formation of the energy spot. The Indian saints in the palm leaves they wrote, “He sacrificed - he got the messages, then just he jumped in the fire well.” My sense, fire well means it’s like a acid water – you understood – like making him to skeleton – to just sacrifice to the God, “Let’s see whatever it happens.”

He jumped – highest cosmic energy – just Betala appeared in front of him, again to make him to alive. “What do you want?” Just he’s asking the protection of him forever and ever to learn about this planet’s energies - how to control to this planet. From that point, the first person, the Jesus, he learned the supernatural things on the negative spirits - how to send, how to give the enlightenment, how to give the moksha to the negative spirits. From the Jesus only, we can find the ways.

In the Vedas, in the Vedic also, they didn’t mention who is the person. They told, “One person, he brought the Betala on Earth.” Like even there is an Indian tradition, the Hanuman is still alive in this Indian tradition – you understood? He’s not dead. From the Treta Yuga, Sita gave the... Who checks the Vedas, they know about Betala, they can find the Betala, Betala... How generally, in the Vedas they wrote, “How it is difficult to get the Betala.”

The same Bhakti Vikramarkudu, when he’s receiving the Betala – who takes the Betala energy, they can sacrifice their body. Even whatever the negative experience they face in their lives, it goes to the Betala - it’s a little Sanskrit message. You understood? Sanskrit message means a little confusion. We no need to worry about it. From the Betala he (Jesus) learned many techniques how to control the negative spirits. Then, just we talk about the techniques, how he approached.

I told the second one Pranikayli, pranik...yeah Pranikayli, pranik. This second one, the Pranikayli process, generally the Jesus did. Pranik, ‘pran’ means life, life glorious like a dazzling, ‘ik’ means to producing the Shakti – the life producing. Generally the people, when they’re reaching that stages, first they takes the any dead animals, dead birds and they holds that, they starts the, through the Sanskrit meditation, whatever the soul is in the body, since like one years, two years, three years...that soul comes to in them. Wherever the soul is in this planet, they can suck that soul in their body. Suppose one dog is died. Even though the dog’s soul is ready to went into another soul, sorry, another body, even that body’s alive – the body’s like a...born like a baby, like a... When you keeping on meditating with the different channels, immediately that baby srrrrrrrrut it takes off, it comes into you, it comes to you. Like it means the soul cycles, turn sections. When we make the one soul and again it’s born, again it’s born, like again it’s born. Like he did, like a thousands years back bones. He tooks and he holds whatever these bones, the soul came in the bones previous, like ten times life – then he keeping on to make it to come to touch the bones, to make him to again. It means he can able to control to many lifetimes to any soul. Today I don’t know it’s a little, it makes me very dizzy... the mind is very tired and this Pranik is really, very, very beautiful messages but I’m seeing you, tse tse tse - it’s not moving you clearly...

Then when he, when Jesus was crucified on the cross there is a nine holy souls came to hang around. That’s one of the first souls, is the Betala, first one is the Betala. That’s why he’s (Jesus) very powerful, any soul have any pain, the Betala, he personally promised to the Jesus - they can take the pain.