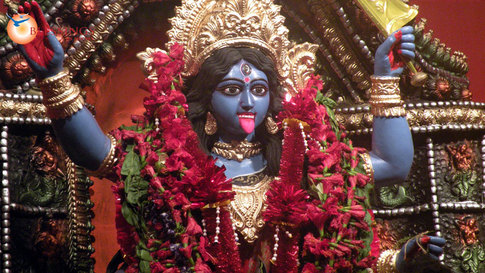 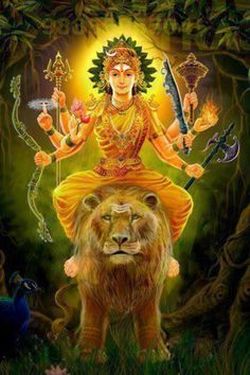 Tanali Ramakrishna is a beautiful friend of Krishnadeva Raya. I told this story before. He’s coming to Penukonda in 1494, it’s late night on the New Moon day, he and his wife and his son. He can’t enter into Penukonda late at night, it’s a strict law, the outsiders cannot enter, but he’s a great, extremely knowledge person. It’s late night and he’s sleeping in the Maha Kali temple. Still you can see that temple outside of Penukonda. The Muslims destroyed it, but still you can the Sri Chakra and they put a little Maha Kali statue there.

It’s a pretty big powerful temple, he’s sleeping in one corner. The whole villagers, it’s a tradition... they’re all going and sacrificing the sheep. It’s late night and they came with the drums and the blood is flowing. He’s a Brahmin, he can’t understand cutting sheep’s heads. Everybody left, then he stands in front of Her statue and he started screaming on Her in a beautiful way, “Are you really loving Mother or are you a devil? Why these innocent sheep’s blood is pouring?” He’s using his beautiful screaming words, she can’t help it - completely he touched Her heart... At the time he’s also doing certain dikshas. He’s, at the time, he’s in little fed-up, vairagya and the same time he doesn’t care. He doesn’t have the food - just he came to look for a job in Penukonda. He’s in the beautiful stitha pregnatatha stage.

Then She came out from the statue laughing, “Hey Tanali Ramakrishna, you really touched my heart. What do you really want?” He asked Her, “What can you give?” He’s very top intelligent. She brought it – one is milk, one is curd, milk belongs to wealth - curd belongs to knowledge. “Which one you want?” It took him a few minutes to decide which one to take. He wants to ask, “Can I just smell which one smells good, then I can decide?” She gave it to smell it. He chose. He’s looking at both, then he put them both in one and drank the cup. “You can do whatever you want now, I want both.” Then She laughed and gave the name to him Vikatakavi, again if you chant frontwards or backwards it’s the same. Kavi means beautiful poetry person. Vikatakavi means very diplomatic and super intelligent. From that day onwards, he connected whenever he wants Maha Kali.

From that time onwards he really helped unbelievably to the Vijayanagara Emperor, Krishnadeva Raya - he is the number one Emperor.  He is the number one guy.  Tanali Ramakrishna is the main channeling to the Lord Krishnadeva Raya - the king emperor, making him to connecting Mother Divine with a lot of channelings.  Then he learned. After darshan he created a lot of Arrows, he created a lot of Arrows.  Then he produced.  He made the king to practice, only, he learned pretty good, he didn’t get it completely.  Even though he had unbelievable powerful genius people in his empire, he got lot of failure.  Lord Krishna Devaraya, the king, he lost all his kingdom Hampi and he lost Penukonda, then he went to Chandraghiri, then his collapse, all his kingdom.

​This fort, this Penukonda, this earth, in the globe this is the birthplace of Mother Divine. Put that way very strong, it’s the birthplace of the Mother Divine.  There’s thousands of proofs, the big boss and Jesus also, did austerities power here, but I want to wait to tell very soon with proofs and evidence certain incredible, beautiful things about Jesus, how he’s really connected to Penukonda - we’ll see...
Back to Swami's Stories