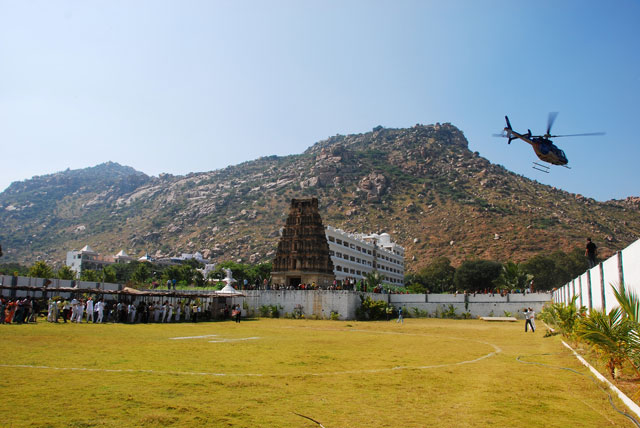 For example, I went Shirdi. It’s unbelievable summer season. I have a beautiful sandals - my shoes. I dropped in front of his temple then I went and said, “Hi,” to Baba, put a garland. Then I meditated, I came out - I lost my sandals. Ok, here you go. Again I buy the sandals, again I lost it, again I bought them, again I lost it, seriously, I lost it. I decided, “Ok I’m not buying the sandals.” If I’m really attached to something, I’m losing it. Practically, it’s not only one, but hundreds experiments in my life happened. If I’m attached to something, Baba is making little teaching, “You shouldn’t, you shouldn’t, you shouldn’t.” It’s fine - I lost the sandals.

I came by helicopter to Shirdi. When I’m going back, I have to go by train. I thought I had a reservation, a sleeper. Let’s go. I jumped in the train. There is no berth. You know where I slept? I bought a newspaper. You know the toilet? I put the newspapers - I’m very tired, I have to sleep. I put them and I slept there. At midnight, two am, a kid came, a boy. He can’t stop. Just he opened, he aimed and he, “Hey, who’s that?” He’s laughing, “Hey!” Then I took my towel, “Ok.” I put him, I opened the door, “Ok.” I asked, “From which berth you came?” Ok, I put him back there.

Then I’m sitting. In the train opposite, there’s one beggar who’s also sitting. He’s sitting and he’s watching me and he’s smiling. He’s making me like that. I came to Shirdi with a famous author, in a helicopter. When I’m coming to Shirdi - so luxurious - I stayed in the air-conditioned hotel, so luxurious. Then I lost my sandals. It’s summer season - huge burning - like water bubbles (blisters). It’s like a kind of feelings. Why I’m saying this, if it really starts to playing on you, irritating, it starts to irritate you horrible. Then I’m really screaming on Baba in my heart. “Hey, if you really want to torture me, you can choose different way. This is not the way you can torture me. This is the worst thing you can torture me?”

Ok, I jumped. I came to the Dharmawaram, near the railway station. Then, there’s two beggars. I have no coins. You know about the Indian, if they want something from you they keep on moving. I said, “Please, I have no money, I have no rupees, no coins.” Something I told. Little crazy word I used. Then the two beggars so mad on me, “Why are you screaming – lalalalalala.” Anyhow, I gave him big note, “Get out.”

Then Anthony’s there, I jumped in my car in the backseat. He started the car and drove two hundred feet. Tire is flat. I’m huge hungry, so much irritation. So much... the worst hard day - the tire is flat - the tire also, little air blown. Finally I came here - hundreds of people waiting for me. “Ok,” a lot of work waiting for me. Then I went in the shower, took the beautiful shower. I went to the fire - just sitting two hours - no more talking. Just decharging. Coming back as a normal person.

Why I’m saying this, even though my life is completely sacrificed one hundred percent to the spirituality, still it’s affecting on me a lot. It’s just a small example. Like that, there’s hundreds. When I went to Europe this trip, especially Holland, “Oh boy,” the worst experience I ever faced in my life!