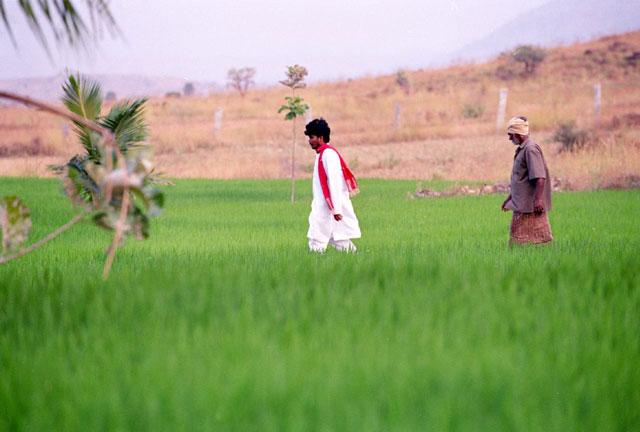 One time, two years back, in this area, amazing drought. The farmers who have the hundred acres land, they don’t even have to eat the food. Like that thousands of people gather in one place. The government was supplying for the sheep and cows and for their bullocks some grass – everyday a little grass. So to protect their cows and bullocks, in those hundred acres, they put their cows and they’re sleeping under the bushes, like jungle people.

Then whole Penukonda, all the circumstance, almost like three hundred villages’ people, and they’re fighting and... I read couple times in newspaper the government is ok - maybe it’s taking care. In front of the dhuni after arathi, I’m sleeping - very tired. One of the builder, Jagadish, he came on the motorbike, “Swami, do you know this? Thousands of people have no food, and they’re really starving and they’re only taking care of their cows. They don’t have enough food and they’re really dying there.” I simply said, “We’ll see, we’ll talk tomorrow.” He said, “Ok Swami, good night.” He left. He went all the way to the gate. I went in the trance. A shouting... I can’t tolerate that huge voice, “GET UP! GO AND HAVE A LOOK!” like that. My eardrums are breaking. Ok, what is going on? Then I called back, “Hey Jagadish.” Then, I took the motorbike, I made him to sit in the back. I drove.

Five kilometers I saw it. Everybody is like... I asked one guy, “How many acres you have?” He said, “One hundred acres.” “Since how many years you don’t have the crop?” “Three years.” “So you don’t have saving money?” Lot of difficulties, marrying my daughter and everything gone and the cows - there’s no grass at all for several hundred kilometers, so we need to take care. We brought the cows here. The government is supplying some grass and everyday we’re feeding the cows until the rain comes.

So I walked all around. They have tiny bit rice juice. They makes it and they drink and sleeping. I should do some work. Next day morning, I gave the order, “Keep, cook the food.” Started to serve all the farmers. So, per a day for lunch, more than ten thousand people, and dinner more than ten thousand people in a row feeding it. In this area and the next thirty kilometers area - for whole that one and half month, trucks of rice, we cooked it and feed them.

Then I challenged the government, “Ok, I will get the drought land. I’ll give the bore wells, then I’ll prove it, how the crops will be. They all made jokes on me. I think you saw how first the land was?

Swami: It’s a desert. I went to the villages, “I need to buy this fifty acres land.” They laughed, “What you going to do Swami, with this desert?” I said, “How much each acre?” They said, “Fifty thousand.” “Deal, give me fifty acres.” I took the fifty acres, then I made them to start drilling, “Keep drilling until the water you get it.” Beautiful water we got it – gigantic water! Then we made the watermelons, and mangos, and rice. I’ll bring few guys to farmhouse. Huge rice paddy I made it. In the hut now, who’s eating from that farm house.

Then the big revolution we brought it on the government. It’s a simple, easy thing, but the government, they’re not focusing on it. I keep telling even the Indians, lot of government officials too, simply try to take care, “Don’t make any farmer with hungry - that’s a huge curse to the county. It’ll destroy.” Now it’s a beautiful raining and the government is drilling the bore wells and making beautiful truta (sp?). The rain started coming to the clouds. A farmer can feed right now ten thousand people. Who really begged two years back - now he’s able to feed ten thousand people. It’s completely changed the system. With one piece of fifty acres land, I’m taking care of almost like... for it comes two times in the crop - three hundred bags of rice, six hundred bags of rice. Each bag is one thousand kgs. One kg five, six people can eat, “Take that.” I can feed thousands of people groundnuts, vegetables, mangos.

The government changed and now who is really a farmer, he’s selected to become a farmer minister. Now everything is going smooth. So why I’m telling it, certain things, who really needs help, you should take care. At the time you should not throw, “It’s illusion, it’s karma, his karma, let him face it.” You know what I’m saying? Who was really, sick people, who really deserves some help - you need to hook them, help them. Through that way, once if you’re doing it, doing it, doing it, the Big Boss Baba is your slave. Sorry to say, I know the way of his actions. You do the ten thousand homas, if you feed ten thousand people - it’s equal. If you do ten thousand homas and if you feed ten thousand people who is really in the hungry, who really needs help, who badly needs help - you take care of them. That is the real power you’ll receive - that is the real blessing you’ll receive from him.