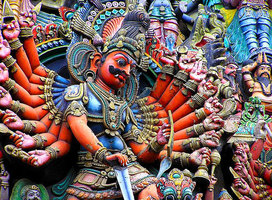 You know Ravanasura? Ravanasura. You know Rama? Rama is the hero, Ravanasura is the villain. But Ravansura have the more power than the Rama - highest power than the Rama. But Rama called sadpurusha, but Ravanasura called no, because of Ravanausra character almost all bad activities. His nature is killing. He’s directly, he can talk the Lord Shiva, but he have no faith on Shiva, he have no faith on Him. Directly he take the Shiva linga, atma linga from the Shiva.

One time, came in front of Shiva, Shiva came in front of Ravanasura, “Oh Ravanasura, I like you very lot, what do you want from me?” Then he asked, “Shiva, what kind of energy’s in your heart?” Shiva is a big man, somebody saying. Ok, I will accept it, if you are calling big man, something is big in you. You try to give that big thing to me, then you will become nothing.” 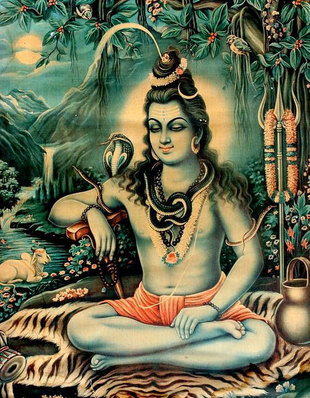 Then he (Shiva) said, “No, you can’t take that energy from me because of, he have no capability to suck that type of energy from me.” Then he (Ravenasura) said, “I won't care please give that.” Then Shiva gave his energy like a Shiva lingam, “Ok take it.” Then he take, then he playing the game like, “Oh, that is your energy. You said I can’t take this energy directly - nothing.” Then he take that thing, then he went to his hunting in the forest. When his mediation is over, then he got the energy from directly Shiva - that thing (Shiva lingam). He suck the energy and he wants to take that and using the misuse, and he’s bringing that energy to his country. Before he’s going, Shiva told, “Don’t put earth on that energy, that Shiva lingam, that energy. If you put that, you can’t remove that, single inch - you can’t lift that.”

Then he (Ravanasura) said, “Don’t say lie. Ok, don't worry,” then he moves. He’s going on, going on walking... When the evening came, he want to take shower. When he wants to take shower in the river, he wants to put that down on anywhere and he’s thinking, “I want to give this Shiva lingam to somebody. Who’s the person?” Then he observe one boy. That boy is Ganesha. You know Ganesha? Ganesha came in another srupam, another structure, “How to take that Shiva linga, steal from the Ravanasura?”
Then he came with a sheep herd boy in the forest in front of the river. Then Ravanasura came, “Oh my dear boy, I will give some charge to you, I will give some energy. Please take this Shiva linga for few minutes. I’m going to take shower, then when I return back I will give lot of jewelry, lot of money to you.” Then Ganesh, “Ok, I will take.” Then he take. When he enter the water (Ravenasura), then Ganesha said, “I will call three times loudly. If you’re not came early, I will put on that, I'll put on earth” Then Ravanasura said, “Oh I will come in fraction of minutes, don’t worry.”
​
Then Ravanasura taking shower. When just he went, then he (Ganesh) started loudly, “Come, come, come,” three times. “Hey, just I, why you are calling me (Ravenasura) immediately? “I (Ganesh) have no time, I'm going - come – come,” and third time is over, then he put on the earth. Still we can identify that Shiva linga in Rameshwaram in India. Then Ravanasura came and with crying and he lifted - can’t. When he’s trying to lift, it becomes big, big, big. That Shiva linga is still it’s growing. Still it is growing each year. It’s unbelievable thing. Nobody cannot believe, but the scientist, everybody's proofing. It's increasing, they made a scale - that rock is increasing. There is only one rock, that in the sand, in front of the water. How can that rock, same that? They carbon tested that rock old, is millions of years. Nobody cannot identify that life span that. ​​
Back to Swami's Stories