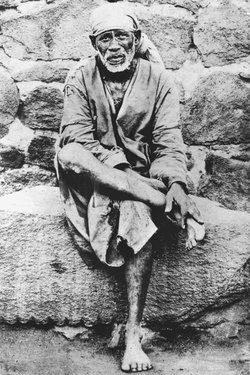 His character is, who comes in front of Dwarkamai Masjid temple, if he is any business man, if he have a hundred dollars in his pocket, he asks, “Be pull the ninety-nine dollars donation - otherwise, I won’t talk.”  Are you understand?  That kind of commanding – what do you want - I will give you.  What you are going to give to me?  But, everyday he collects some thousands of rupees.  Evening, he disperse the money to all the poor.  He disperse the money to the spiritual center and, again, he going to begging on the street.

He takes shower three months once, two months once - he won’t change the clothes.  After dirty, dirty, he peoples….. He have a best student – Tatya.  Tatya.  He’s a very dear, to only he’s a protector.  He have only good - you know good understanding with Baba and understanding means, commanding nature on Baba.  He’s only person making, catching Baba, “No, you must remove the dress!” and making the, remove the dress, and making another new dress, taking shower with the rose water.

And he (Baba) feel, “Why you are washing my body?  You wash in the inner side?  Outer side is no good.  Inner side is … can you wash my inner side?  Not possible to you.  I’m every day washing my inner side – that is pure smell.  Outside is very dirty.  After when inner side, light gone - it become very dirty – bad smell, fraction of two days, three days – very terrible, bad smell.  Can you wash that bad smell?  So, you wash your inner soul.  My dear Tatya, listen when you say I know everything, please wash your body!”  There’s sometimes, when he using the ganjai and he’s lost his… he made a very sick.  Then he’s asking, “Please bring some ganjai.  Please bring some ganjai.  Please give some ganj.”  No, nobody cannot.

One last moment, Tatya fell sick with cancer.  You know cancer - maximum four, five years on the bed - every day vomiting the blood.  And everybody’s asking Baba, “You have a supernatural powers.  Why can’t you use on Tatya?  Why can’t you give it … why can’t you cure him?  What is your leela?   Why you are making like this?” 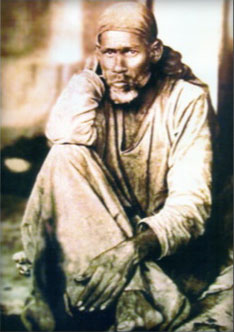 When Tatya’s mother is the real devotee to Baba, starting at the moment of Tatya is very little boy.  When the Baba isn’t engaged, the villagers the peoples thought, the village, Shirdi’s peoples, it is a, “The Baba is a black magic person, he’s a very bad man.  Oh, his soul is very bad.”  So, the peoples not allowed (Baba) in the village.  He slept under the trees out of the village…. beginning the village.  With hungry, he’s going on to meditation with hungry - he fell down.  Tatya mother, she observe when she’s going on the route, and she made the food secretly to him.  That village prasent (villiage leader), he gave a statement to the people, “Nobody cannot give the food, no water, to him.  He’s a very bad man!”  He gave a one order to all the villagers.  The president word in India, who’s what they says, Prasant in village – the, all peoples must follow his word.  That is the system.  Are you understand?

So, Baba suffer very lot.  After some time, Baba used his medicines through the herbals.  Who is going on the streets, on the front of the village, from beginning… cough, with some diseases - he caused them - fraction of minutes, to heal.  They become happy.  And they were going in the village, “Oh that man, bad man, they are saying everybody is, bad man.  No, he’s a very good.  He healed my health. I’m very working, my fever is gone, my headache is gone, my stomach ache is gone.  My eyes - now it’s healed, now it’s good.  My leprosy’s gone!  Is coming very good.”  Like that, people think he’s, “Oooooooo, what is the wonder?  What is the wonder?” 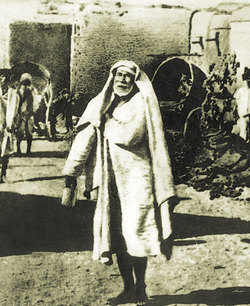 Then the peoples all made one.  Then they made the Prasant, again, they brought Shirdi Baba.  When he came in street, in the village, again the Prasant makes some very dirty things on Baba.  Shirdi Baba - to making him to killing. You know killing - and, sending some gangs to injure Baba - throwing some snakes in his Mandir - to beating.  When he’s walking the night, some people gang with sticks making the injures.  Like that, suffer a lot of things from that people.

Every day Baba uses, in his Mandir, lights with the oil.  He, every day morning, he goes in front of streets, in the streets - asking the oil.  After getting the oil, he makes the lights in the night times, in the Dwarkamai – in the evening times.  One day the president declare, “Nobody cannot give the oil!”  The merchants, you know merchants - oil merchants.  So Baba not get…. That is the festival of Dipavali.  You know Dipavali?  In India, good celebration – lights celebration.  Diwali.  Then Baba came and sat,  “It’s Ok.  I will make it water.”  And he used the water to light.  Then the peoples surprised in the villages, “Oh, he’s a holy person.”  They recognize, he have the power – he can use, he can use the healing - he have the power.

You know about Shirdi Baba meditation power?  He done sixty-one years meditation, then he made the lights under the bitter tree, what is called, neem tree, bitter, that leaves is very bitter.  Not lemon, neem tree, lemon is citrus, I know that neem tree.   He did amazing austerities, he worshipped his master Venkusa and he buried four lights in Shirdi, in the gurusthan under the neem tree – satya, dharma, shanti, prema - still they’re burning, his austerities’ power.  It will last for a thousand years.  He’s also a great rishi – pure Datta…In Shirdi, still we can identify, he made lights in the underground without oil, without water - just made that four lights and he sealed and he put the sand and mud covering under the neem tree.  When the people is making angry on the Baba one time, then he said, "What you’re thinking about me, I’m a good," and when he’s angry, then he said, "Go and dig it, you find."  The peoples dig and they saw the room.  Lot of people sat there when Shirdi Baba dig that place, when he made the lights, he’s everyday living in the old village, in the small village, everyone’s surrounding, walking and that, "How can he made that?"  Still we can identify that - that is called gurusthan.

Some thousands of peoples arounding that, that’s called gurusthan.  Then people shocked that his... that lights is his meditation power lights.  Meditation power lights, he made that, about his tapas, you know tapas - tapas means meditating, meditating, meditating.  Finally he used his power to light the lights and he kept that power thing till it is filled.  The peoples, what the people seen just hundred years back, nearly ninety, hundred years back - witnesses and evidences and their life histories.

Tatya mother help from beginning to last stage, to giving the food to Baba.  When she’s dying, Tatya is Baba’s student - he’s fourteen, fifteen years old boy and she take a word from Baba, “I’m dying.  I’m very sick, Baba.  I’m very old.  You must protect my son total your life.”  Then Baba gave word, “I will protect your son, don’t worry.”  That’s why, she died,  Baba is … almost…

Tatya is living with Baba a lot of time.  Even though Tatya have a beautiful house in the village, when the night times, he came and he sleeps with Shirdi Baba, night times - listening some words from Baba.  And again, Tatya doing his works, farmer works.  You know farmer - in fields.  In last days Tatya, when he is in thirty-two, thirty-four years, and the Baba is eighty years old - he felt very sick, Tatya - with cancer suffering, every day, vomiting the blood. 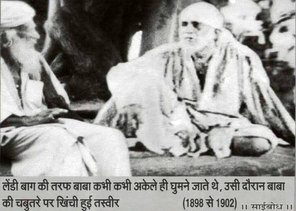 The peoples surprise, Tatya doing service since when he is a boy up to old age, but Baba not looking after him.  Maybe Baba have no powers - the people making the confusion.  And Baba gave a word to his mother, “I will protect your son.”  He’s causing….. he’s not keeping his word - lot of rumors, lot of commentaries running in the village.  One day, that is the October 18th, Vijayadasani that’s a festival in India, Tatya felt very hard, sick, last stage, like in coma.  You know coma?  Lot of Tatya friends came with crying in front of Baba, “Baba, your student is dying, last stage.  Just you come at least one time.  Since two years you not came in front of Tatya.  How you are tough, your soul is very, your mind is very like a stone, your heart is like a stone. There’s no melting nature you have!”  Like that they are talking.  Then Baba said, “No worry, I will give a treatment from here.”  “You are giving treatments since three, four years, no happen - nothing happen.  Your saying, telling same word from three years.  At least you come - Tatya is wanting you see in his last minute, at least to your face.  Come, he is crying!”

Then I said, “Ok, you go.  It is lunchtime,”  Lunchtime means 2:30, 3:00….. “What is the time?  Lunchtime?”  Lunchtime - they go.  “Everybody take lunch then come, I’ll give treatment.”  Everybody disperse.  Then Baba sit in front of fire.  Baba uses Fire twenty-four hours in throughout year, 365 days, in his Mandir - one element – fire.  And he is straightly in front of, almost burning the fire with the wood - and, he send his energy, and he take that sickness to his body.  Suddenly, Tatya became active.  He (Baba) got the cancer and he cough, cough, cough with blood cancer, he died.

When he dying, there is only one lady – Lakshmibai - one lady sweeper in the Mandir.  That Mandir is only twenty feet, twenty feet – twenty feet long, twenty feet long.  It’s triangle, small Mandir.  Lot of peoples surprise, “Why Baba, you are sacrifice your life – that is the secrecy?”  That is the secrecy - that kind of nature, Shirdi Baba.  When he is dying, Baba said, “Who calls me strongly,” like sitting one place, “who have faith on me hundred percent - my rays, my protects come - even from my Samadhi.  I will work my duties from my Samadhi.  My bones will work – my bones talks to my devotees.  Who comes in front of my Samadhi, my bones talks.”

Lot of experiences going on in India - wonderful experiences.  Powerful master he is!  Everybody thinks he’s a old man, grandfather.  His life is a, like a heaven.  When you’re reading life history, when he’s asking donation - the peoples make thinking very bad.  When he’s asking food - thinking very bad.  When he’s eating meat - thinking very bad.  When he’s smoking - the peoples think he’s bad.  Activities is quite different - power is different.  The cow eats the grass, fruits, papers, wall posters - you know wall posters?  But its milk is, its milk is pure.  Sometimes, we never think, “Oh, the cow is eating wall posters, we don’t eat that, her milk, that milk is very dirty milk.”  If you think like that - no…  So, some peoples thinkings master’s, “Oh, he is doing like that, like that, he’s man like that.”  That’s not important - we must get what is in his heart - what he is giving.  We must suck that - we must only concentrate on that - not for his activities, not for his things.

Are you understand?  This is, just I’m telling briefly, my point is – master’s directions, activities, characters in the nature - quite different and to understand - to quite difficult.  Master’s natures, understanding quite difficult – following, just belief and following is good.      ~ Five Elements, BKN 1997 ~
Back to Swami's Talks