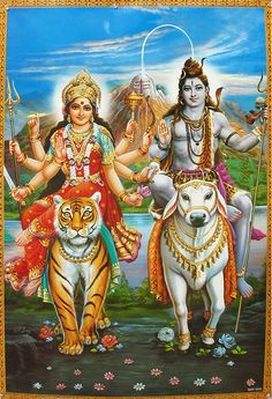 ​Few people, crazy guys, they want to see Maha Para Shakti, you know, they want to see Maha Kali. Then I blessed them, I promised them. Once if you’re there inside, if the energy permits me and permits, there’s a huge chance, if they see Para Shakti with eighteen hands, with even like Dwarkamai, like twelve feet like that height, they want to see one hundred and eight feet Para Shakti, then the whole room it started to disappear then they’re going to see it. It’s not my business, it’s their choice. Go ahead. At the time, if they go shaking, at the time they need arrows, do you understand? I already told it, when it’s important to use the arrows. I already told it. Then later on, I don’t know how they’ll develop with that Para Shakti. Even Ravanasura, he simply begged, “Please go away, get out!” He slapped himself.

Let me tell this story, again, one more time. He meditated, meditated, meditated... Totally he got five times the darshan of Shiva, five times super duper failure. One time, he really, really impressed Shiva - he got the darshan. Whenever Shiva appears, the Shakti is also there. At the time, Parvati, Shiva’s Mrs. is the gigantic, the most beautiful... Of course She’s mother to the universe. He looked at Shiva, then he turned to the Mother, then She’s so beautiful! Immediately he asked, “Shiva, can I ask a boon from you?” Shiva said, “That’s why I came here,” he has the stamina he can discuss with Shiva.

The discussion, who does to Shiva in the universe, the majority is little shaky. I will tell it’s shaky and why it’s dangerous if you talk to Him and the majority what type of things you can ask.

He asked, “Can you give your wife to me?” He said, “What?” He said, “Yes I want your wife.” He looked at Her, “Please, he’s asking you, go.” Then Parvati is saying, “It’s completely unfair, I’m your wife! You shouldn’t send me with this guy, even if he’s super devoted to you.” Shiva said, “Please go! My order, go and make him happy, he’s liking you so much.” Ravanasura is seeing only a part of Her beautiness. He doesn’t know another part of Her.

Then She’s one part very upset on Shiva. It’s a true story. We have the proofs and evidence in the manuscript, from the Puranas. Then, he’s walking in the front, She’s walking in the back. Who ever is coming opposite to them saying to Ravanasura, he’s a king you know, they’re saying pranam, then looking at Her - simply dying. Many people in the streets, as he keeps on walking to his palace, dying. He’s thinking, “Maybe they’re going in the coma seeing this beautiful woman.” Then Narada came. Everybody knows Narada, he’s the messenger and trouble maker. “Hey why you asked for the Mother, it’s not fair.” He said, “Narada you’re a sannyasi, what do you know about, get out.” He said, “Thank you king, God bless you.” Then he left.

Then Ravanasura’s guru, Sukracharaya, he’s walking inviting him, then he saw, “What? Who is She?” Then he said, “My dear master, She’s my wife, I’m not giving to you. Don’t ask that boon. I can give anything, but don’t ask that.” He said, “Such an idiot you are. Look at your back, look at Her again.” He looks, “She’s so beautiful.” He says again, “Look.” He sees again, “Still She’s beautiful.” Then he opened his third eye, “Look!” With Her tongue, the most crazy Para Shakti Kali! “Can you really enjoy with this lady? Is it possible to you? Do you know how many people died in your kingdom when you’re walking – hundreds, she already ate them - just heart stroke, everybody got heart stroke. She licked each person’s soul!” So, you did super mistake. Then he’s so angry and mad and turns, “Hey, why you came this far?” She says, “No, no I want to come to your palace, I want to be with you, it’s the order, my husband gave the order.” He said, “Get out, get out!” And he falls down on Her feet, “Please forgive me.” Then She disappeared.

​With using on the final spot the kama arrow, diverted... the maya diverted. That’s why I’m saying, be clear what you want.
Back to Swami's Stories