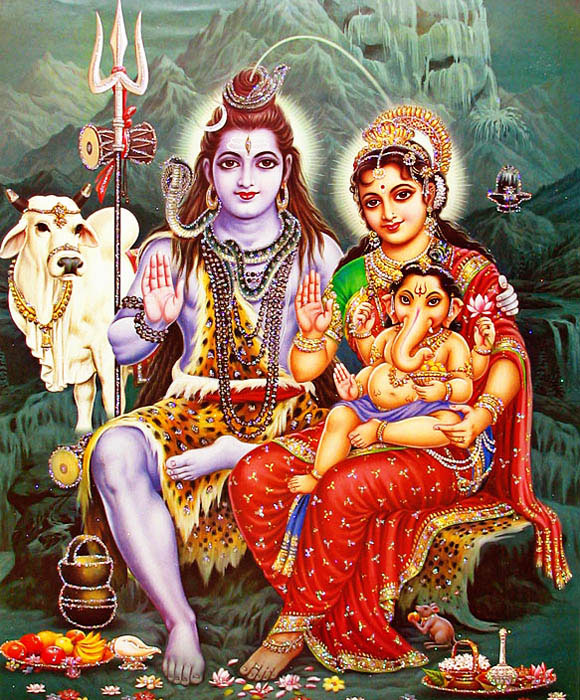 If you can’t, think Lord Ganesh story, she prepared with yellow powder and she made a baby. How come she was able to make a baby without male energy? It’s a big question mark. Are you listening to me? She created with yellow powder and she created a baby and she put that baby outside her door when she’s taking shower... really long shower. Serious, that’s in the real evidence, clear proofs. Shiva went to the meditation to practice his yogas and enjoy the deep silence. That boy has to protect outside her door, nobody getting into the house to the Kailash. That boy is carrying little small knife, just walking back and forth, nobody to get in.

Shiva, he finished his meditation, just he’s coming in the house. To himself, Shiva, he had a confusion, “Why that boy’s stopping?” “No, my Mother doesn’t allow anybody to go inside in the house.” Shiva completely angry, “How without me, my wife had a kid? Even I’m not in the house for a little while and she had a kid!” He’s under the huge illusion, he can’t recognize to himself it’s possible without him - she can do it, make the creation. Then he started to arguing, “Hey kid, I’m your father, if she’s your mother, I’m your father. Believe me, I’m her husband. Please get me in!” He said, “No, she’s in the shower, she’s doing something herself peacefully, don’t disturb. That’s her order, I don’t care who you are!” Like really arguing, arguing, arguing, endless...

Finally Shiva got huge angry. Just he used his triangle to cut his head. Nobody can kill him, except Shiva because of, Shiva and Shakti, he knows her energy. Then he cut that boy’s head off. Then the head is gone and he’s shouting, “Hey Mother protect.” Then she woke up in Her deepest relaxing in the water. Then she came out crying, “You killed my baby! You have to give back my baby!” No chance, once if it’s cut off to refixing it. Cutting off and again to refixing, it is pretty... Once if the Shiva used his high frequency energy, then he can’t himself, get back again to refix it. In that part, the Kandana yoga comes. when one yoga, the Kandana yoga is born from that subject... the bijakshras here it comes... the Kandana yoga.

So, she’s keeping on crying but he can’t fix it because he used his high peak energy at a time - there’s no more energy. She also cannot fix it because she put her energy to creating that - no energy left. No chance to refix it, then Shiva, he ordered to his disciples and to lot of Rishis, “Go find whatever head is sleeping to the North, cut that head and bring it and we can do some process to make it come alive. The Shiva students, they’re keeping on... The Shiva didn’t mention it has to be male, it has to be human... Any head, just they saw sleeping towards the north, just they cut the head and brought it.

Shiva’s wife so upset, “To my beautiful kid, to refixing with this elephant?” Then Shiva gave a boon, “I’m so sorry, forgive me, this mistake, even your son, the first, anybody’s going to do pujas, he’s the first person when anybody’s doing the pujas, he’ll receive the first worshipping, the first credit. He’s the Vighneshvara, so please...” Then all the Brahma, Vishnu, Rishis they put all their energies - then that boy woke up with elephant trunk - that is Ganesh. That is why any temples in India, in Hinduism the huge religion, first we worship Lord Ganesh the trunk master.
Back to Swami's Stories