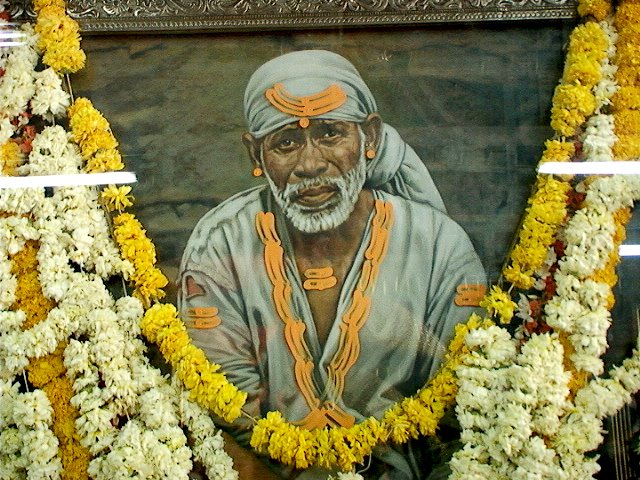 ​You know about Shirdi Baba? He remove his, directly , soul three days and through the villagers came in front of his body and he told one person Mahalsapati, his student. When Baba is in 72 years old Shirdi Baba, he wants to do that because of his devotee is in problems in some his area. Baba removed his body directly taking the soul from the body and he went out. Three days - the doctors came and tested, "He’s no more, he’s died."

After three days lot of peoples, the village Prasents and everybody, the collector - you know collector, the District Head - everybody came, “We must be burn the body, he died.” After three days, again he came, Baba came - just make with laughing...  It means Shirdi Baba he came as a human being, he’s eating, he’s drinking, he’s smoking, as a human being he came. But he learn learn lot of things from his master. What is his master’s name, Venkusa, Venkusa.

When Shirdi Baba is in ten years old, he reached his guru, the guru name is Venkusa and he learned six years - he done service in front of the master six years. Then he became very good healer. Even though his character is begging, begging means, if anybody’s coming into the dwarkamai just he’s dominating for the donation. When he’s in - 150 years back 100 rupees means, equal to at the moment $4,000 - 150 years back - otherwise he won't. Then he collect the money, again he spread the food. Suppose lot of peoples bring the beautiful food in front of him - he won’t take. If he likes he’ll give, otherwise he won't takes. He will take the begging bowl and he went to the street asking on the street, taking the food and coming in his old mandir. Even though he’s showing some powers and miracles, the people’s made him very suffered, very troubles, when he came by seventeen years old to the Shirdi.

When he’s in seventeen years old in Shirdi, nobody’s not giving food to him, at least nobody cannot touch the water in the tank. He sleeps under the trees, first gate of the village, entrance of the village with hungry some days, and some old people found that boy , seventeen years old boy , “Oh, he’s very hungry . He’s very depression. He can’t concentrate, he fall down.” Then some people went there secretly. The village President commanded, “Don’t give any food to that boy, he’s a boy of black - magic boy."

The people’s thought Shirdi Baba is black magic man. He do’s the harm the people - they think very bad on the Baba. Just he said, “Ok.” He knew, but his master said, “You go only Shirdi, don’t go any village.” The Shirdi people not inviting him the village. Then again he praying in the master, “Why master, you’re making testing.”

Just he lost in his systems, but slow by slow, some peoples making friends to Shirdi Baba, again he enter the Shirdi. Very few people loving Baba, one percent, two percent of the village giving little food. He started the treatment with the herbals. Suppose one person is with the leprosy, you know leprosy? You know Baba knows herbals very lot because of he learned lot of things from in the forest in front of his master.

In meanwhile, he suffered very, very lot, very lot... It means, God is decided to everybody’s character in the nature. Today I came here, I’m doing this work means, I think by God's grace. In my life I have lot of experiences with the Shirdi Baba directly, physically, unbelievable things - lot of experiences. So if you hundred percent believe on Shirdi Baba, “He is with us,” he is with you - that is true.

Tim: Is he on the Earth now?

Swami: No. He’s no more. He’s 1918, October 16. He’s no more. So, Shirdi Baba uses almost all in front of his dwarkamai, in front of the fire. I told the fire element about that, why he uses the fire. From his beginning to up to now the fire is burning in his mandir, in his temple. In the Five Elements, how many elements in the nature?

Swami: Baba uses only, he selected only one element, that element is the fire. Lot of, hundreds of people coming to him to visiting him. He heals the people through the fire. He created the fire - that fire is still firing and he said, “You must be continue the fire up to the Kali Yuga.” You know Kali Yuga?

Swami: Up to ending the Kali Yuga, some thousands year. How to heal the fire means that comes in the course of the Five Elements, that fire element. Right. Where we are now?

Mary: Could you tell us, “Om Sai, Sri Sai, Jai Jai Sai” is that right?

Swami: It's Nama Sankirtana - Om Sai Shri Sai Jai Jai Sai - to calling Shirdi Baba name. (Swami sings the mantra three times) Like that, just singing. Come one time to India, everybody, there is a lot of beautiful places to see and there is a one Shiva temple in Karnataka - lot of people said that is created by Shirdi Baba.